In this work the traffic of Lisbon is portrayed exploring metaphors of living organisms with circulatory problems. Rather than being an aesthetic essay or a set of decorative artifacts, my approach focuses on synthesizing and conveying meaning through data portrayal. This portrayal is embodied in the visualization: The Blood Vessels in the traffic of Lisbon. I use an adaptive physics system to build and manipulate the road network – the thickness, the color and the length of the vessels are excited by the number of vehicles and average velocity in each road. With this system I try to bypass the strictness of contemporary visualizations that depict data accurately through direct mappings.

The road network of Lisbon was queried from OpenSreetMap, parsed and filtered. Using this information, a spring based physics system is build for the road network and a filling structure of each vessel. The data is overlaid on the resultant structure to determine the road where each vehicle is at a given moment. This allows to inject data at runtime and excite the system as follows: a greater number of vehicles on a vessel tend to make it thicker, higher speeds tend to contract its length (an vice-versa). The latter behavior was chosen in order to transmit a global impression of the perceived distances within the city. This behavior shrinks the city when the traffic velocities are higher, and distends it in the rush hours when the city faces congestion problems. In what concerns coloring, lower speeds imply the darkening of a vessel, expressing slower circulation and stagnant blood.

The vessels’ visualization, with crude aesthetics that are innate to the visual metaphor of an organism with circulatory problems, pulsates for each rush hour and stresses precisely which roads are congested. For example, in the following figure the most problematic roads are (without order): 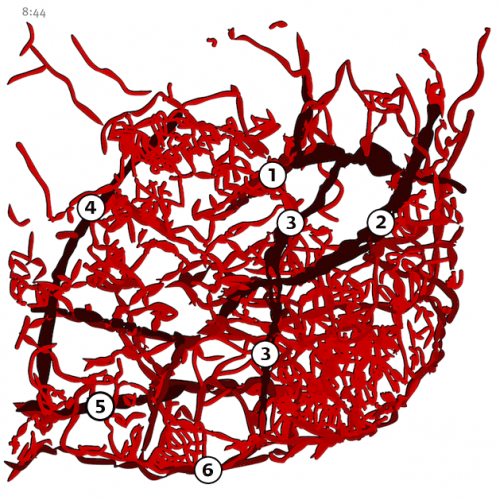 As a matter of curiosity (or not), here are some previous failed attempts to attain this metaphor using swarms and particles — I call them the hairy roads :p